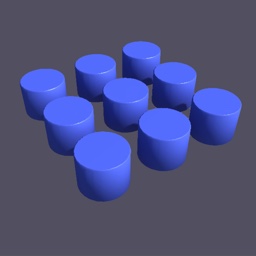 Girds are an important and common type of  spatial organization in buildings. A grid often determines the placement of columns, beams, roof trusses and other structural components efficient and organized. Grid organization is found as early as Mesopotamian cities, Egyptian temples and Roman fortifications. Formed by two intersecting sets of evenly distributed parallel lines, a grid has points, or nodes at each intersection of these lines and rectangular cells bounded by the lines. Each line of cells is called a bay. For example, a warehouse might be 6 bays wide and 12 bays long.

Grids may be made irregular to accommodate various needs for functional requirements of richness of spatial arrangements. In Archimatix, it is possible to have grids of grids, which help to achieve such irregularity. A grid may also be randomized with a Jitter based on a Perlin value.

The GridRepeater places input meshes around locations on a grid. In architecture, grids are often employed to organize the basic layout and structure of a building. Columns, beams, walls, and windows are often organized in a grid. 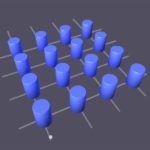 The Node Mesh input is the source for meshes to be located at the intersection of grid lines. For example, in a building, these might be where columns are placed.  In general, the grid nodes will feature vertical elements of structure. In a multi-story building, the grid nodes might have I-shaped steel columns that rise from the ground to the top of the building. 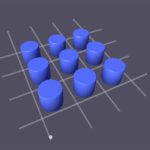 The Cell Mesh input is the source of meshes to be located inside a grid cell. These might be thought of as the location of chocolates in a box of chocolates. An architectural use of cell placement might be for a grid of domes that serve as the roof of a building, as in the desert caravanserai below. 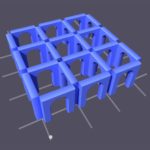 The Span Mesh inputs of the GridRepeater are SpanU Mesh and SpanV Mesh. These are meshes that would span between grid nodes along the segments of the grid bays.